Calcium Carbonate is an inorganic mineral compound having the formula, CaCO3. It is used as a pharmaceutical excipient, antacid, and source of calcium. It may be obtained from natural sources, or through chemical synthesis. Pharmaceutical grade Calcium carbonate is supplied as an odourless and tasteless, white powder or colourless crystals.

Calcium carbonate is a chemical mineral substance bearing the chemical formula, CaCO3, making it a carbonic salt of calcium. It is one of the most important minerals on earth, being present in the earth’s crust (4% by weight) as well as in all living organisms. In marine animals, Calcium carbonate functions as a protective shell, and in crustaceans, it is found in the cuticle, where it serves as a reinforcing material.

Calcium carbonate is a highly versatile material. It is used as a filler, reinforcing agent, and pigment across many industries, including paper production, plastics and rubbers, inks and paints, food, cosmetics, and pharmaceutical production.

Commercial grades of Calcium carbonate are obtained via any one of the following methods:

Mechanical milling and processing of carefully-selected natural limestone ores or marble. This grade of Calcium carbonate is what is known as Ground Calcium Carbonate (GCC). GCC is used mainly as an industrial mineral filler, as well as in food and nutraceutical products as an additive and filler, depending on its particle size, colour, or purity. Highly purified grades are also available for use as excipients

Synthetically via chemical decomposition of limestone followed by recarbonisation (The Solvay Process). This grade of Calcium carbonate is known as Precipitated Calcium Carbonate (PCC). PCC is generally purer than GCC and its properties can be fine-tuned to suit particular applications.

It is important to note in n the pharmaceutical industry, both GCC and PCC grades of Calcium carbonate are available for use as excipients. Not only is there no difference in the chemical formula, but purity levels can also be matched to pharmacopoeia requirements. That stated, there are significant differences in physical properties, in particular: 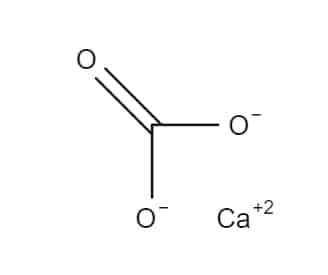 Key: n/a Specification is not listed

*All claims with respect to conformity are subject to our Terms and Conditions. No express or implied warranty is made for specific properties or fitness for any particular application or purpose.

Applications in Pharmaceutical Formulations or Technology

Calcium carbonate is a highly versatile material excipient. It is used in oral solid and liquid dosage forms both as an excipient and active pharmaceutical ingredient.

In oral solid dosage forms, Calcium carbonate functions as a filler – diluent and as a dry binder. It is widely used to formulate tablets and capsules, as well as granules and powders where the use of an inorganic, less abrasive filler-diluent is preferred over traditional fillers.

Calcium carbonate is often the preferred excipient in formulations where the active pharmaceutical ingredient is poorly soluble and/or present in low doses.

A representation of how Calcium carbonate compares with other commonly used excipients is shown below: 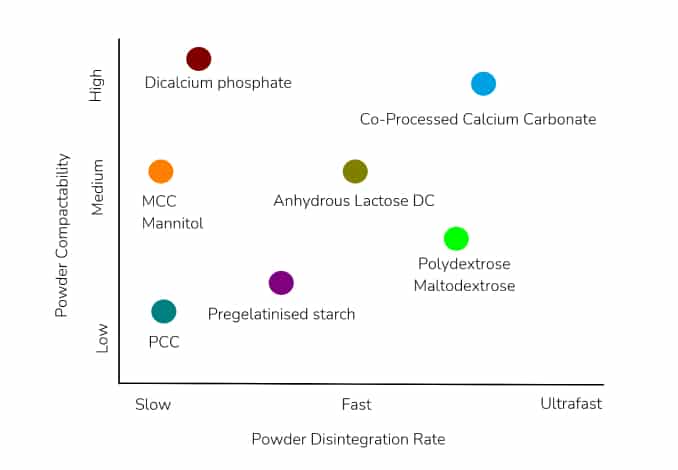 When formulating Calcium carbonate tablets, care must be taken not to exceed the daily suggested Calcium (<2.5 g per day for those under 50). It is recommended that no more than 500mg be included in a single dose. If the tablet fill weight necessitates a higher amount of Calcium carbonate to be used, this should be split, and taken 4 hours apart.

Not that higher Calcium doses (i.e >500mg) are also less bioavailable. A combination with Vitamin D can also aid the uptake of Calcium, which helps the the body utilise it more effectively.

An example of a simple tablet formulation utilising Calcium carbonate as a filler that can be processed via direct compression or wet granulation is shown below:

Use of Calcium Carbonate as an Absorbent for Oily liquids

Fine or micronized Calcium carbonate grades can be used to absorb oils or oily active pharmaceutical ingredients or other formulation additives allowing them to be transformed into dry, highly compressible powders. The higher the specific surface area, the greater the extent of oil absorption.

Many dietary supplements take the form of tablets, capsules, or stick packs. It is suitable for formulating chewable, swallow, or effervescent tablets. For tablet production, direct compaction is often the preferred approach as it is faster and more efficient.

Calcium carbonate is commonly used as a filler-diluent and dry binder in nutraceutical tablets. It offers the added advantage of providing highly bioavailable Calcium in a cost-effective and accessible format for many consumers.

Generally, highly pure, co-processed natural or ground Calcium carbonate grades are the preferred raw materials for the formulation of nutraceutical tablets. These grades are highly compressible and free-flowing, rendering them the ideal ingredient for tablet formulation.

With the exception of Calcium citrate, Calcium carbonate is preferred as a filler in nutraceutical tablets over other Calcium salts, such as Calcium phosphate, Calcium citrate, and Calcium gluconate, as its more cost-effective and more bioavailable, particularly when ingested with/after a meal due to the helpful action of gastric hydrochloric acid.

Application of Calcium Carbonate as a Pigment

Calcium carbonate has been used as a white pigment since antiquity. It is still used as an extender in construction paints as well as a pigment in many other fields. While lacking the whiteness of titanium dioxide, it is a safer, more widely accepted material and known for its high binding and coverage properties, especially when used to formulate high solids coatings.

Use of Calcium Carbonate as an Active Pharmaceutical Ingredient

Speciality grades of Calcium carbonate certified to the purity requirements of the pharmacopoeia are used as sources of calcium for the treatment of osteoporosis.

Calcium carbonate is also an important active in the formulation of over-the-counter digestive aids and antacids. Being alkaline, it reacts with gastric hydrochloric acid, according to the following scheme:

Calcium carbonate occurs freely in the natural environment and is the major constituent of limestone, marble, calcite, and aragonite. Humans and animals are ordinarily exposed to Calcium carbonate naturally dissolved in drinking water. It has been used as a food additive for several decades and is currently approved by European Food Safety Agency (Council Directive 95/2/EC) and is assigned the code E170. It is also approved for use in oral pharmaceutical products as an excipient, on the basis that it is a non-toxic, non-hazardous raw material.

The European Commission’s Scientific Committee on Food has determined that Calcium is well tolerated at a daily calcium intake of 2500 mg per day, whether it is through dietary intake or supplementation, and it does not lead to any adverse effects.

However, a number of potential side effects of excessive Calcium intake have both been described, which include:

On the basis of these and many other studies, authorities have concluded that the ingestion of Calcium carbonate by humans is tolerated at an upper intake level of 2500 mg per day (equivalent to a dose of 104 mg/kg body weight Calcium carbonate for an individual with a bodyweight of 60kg). No adverse effects are observed within this dose range.

Finally, since Calcium carbonate is used as a food additive with an ADI not allocated, the material does not create concerns regarding its toxicity when taken orally.

Calcium carbonate dust is an irritant to the eyes, nose, and mucous membranes of the airway, as well as the skin. Contact of this material with eyes can cause redness and pain, possibly due to local inflammation of cells. Thus, Calcium carbonate is hazardous when individuals become exposed through inhalation and or skin contact. The effect of temporary contact with intact skin is, however, minor.

When handling Calcium carbonate, you should observe precautions appropriate to the circumstances and quantity of material handled. Eye protection, gloves, and a dust mask arc are recommended. Calcium carbonate should be handled in a well-ventilated place.

Calcium carbonate nanoparticles are nanosized particles of Calcium carbonate, typically in the size range of 10 – 80 nm, and having a high surface area (30-60 m2/g). They are obtained synthetically from Calcium oxide slurries and are mainly used as reinforcing additives in plastics, industrial coatings, and imaging technologies.

Calcium carbonate nanoparticles have also been investigated as drug delivery technologies, particularly for delivery and stabilisation of protein drugs, however, there are currently no commercialised products yet.

Studies have shown that Calcium carbonate nanoparticles are biocompatible. Exposure to human cells does not show damage to cellular components, such as DNA. This suggests that these materials are probably safe for use, although more long-term studies are needed for conclusive findings.

The fact that Calcium carbonate is a major constituent of minerals such as limestone and marble, which are widely present in the earth’s crust, attests to its relative stability. This also applies to Calcium carbonate excipient grade. Even though Calcium carbonate shows excellent stability under ambient conditions, it should be stored in a well-closed container, in a cool, dry place away from direct sunlight and water.

Calcium Carbonate may be obtained from naturally-occurring mineral ores or obtained synthetically using widely available non-critical resources. It is an inert and non-toxic excipient and considered safe for the environment, with minimal long-term impact on ecology or marine life. Calcium carbonate excipient grade achieved a total score of 76/100 by the Excipients Forum Sustainable Chemistry™ scoring scheme.

SMI (and its subsidiary, Mineral Technologies Inc) is the world’s largest producer of PCC. SMI’s grade of Calcium carbonate is supplied under the brand name:

In addition to PCC, SMI also provides GCC, which is sold under the brand name:

Imerys SA is a supplier of PCC which is marketed under the Calcius® brand name. The following grades are available: 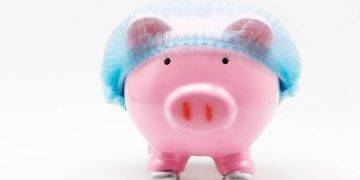 In a pioneering procedure, a team of surgeons at New York University Langone Health Grossman School of Medicine in New... 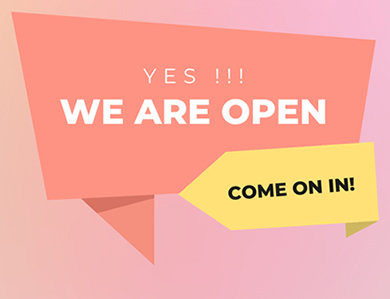 £79.99
ADD TO CART
Back to Top
Product has been added to your cart